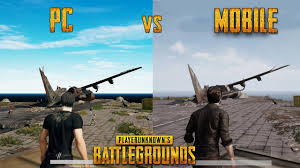 The PlayerUnknown’s Battlegrounds (PUBG) – the most popular and versatile mobile game of the year 2018 was first released in the PC version. Over time, considering the popularity of the game, the development corporation decided to release its mobile version known as PUBG Mobile.

This decision of launching the mobile version resulted in a massive success for Tencent corporation. The game surged in the gaming market of the year 2018 and is continuing its ongoing trend for this year too. The mobile version has more than 400 million users registered and the numbers are increasing at a rapid speed.

The first and foremost difference between PUBG Mobile and PUBG PC graphics. The mobile version of PUBG runs on low-end graphics – usually designed considering the specification of standard smartphones in the world.

On the other hand, PUBG PC runs on high-end graphics that give a soothing touch to the gaming experience. The PC version of this battle game is quite fascinating. The graphics of these versions actually make a huge difference. On mobile, one can hardly cross 480p, whereas, the same game is available in high quality – 720p and 1080p.

There are a few weapon changes on the PUBG mobile version that you’ll have to get used to. Thankfully, all of the weapon changes are beneficial if you can take advantage of them.

Firstly, the weapon recoil has been dropped considerably – this is understandable when you consider that most people will be playing the game on their mobile device.

This means that high damage weapons that’d usually have really high recoil on the PC and Xbox One version of PUBG are now super powerful. Don’t be afraid to pick up the AKM, SKS, and the MK14 – these weapons now have far less recoil but they still do very high damage.

Secondly, the M16 can now use an 8x scope again. Support for the 8x attachment for the M16 was originally removed due to balancing reasons, but PUBG mobile is based on an earlier version of the game code, so make sure to get your hands on the M16 if you find an 8x scope.

We are sure we’ve all had a moment on the PC or the Xbox One where we go over a hill with a bike or a buggy and end up flipping onto our heads and killing ourselves. Thankfully, the vehicles are far easier to control on PUBG mobile, so this is far less likely to happen.

Due to hardware limitations, the physics on the vehicles has been toned down to help performance. This means you can go super fast off roading in any vehicle and your vehicle’s wheels will pretty much hug the ground.

Learning about this was quite a surprise because I’m often afraid to drive the vehicles offroad on PUBG on the PC. Now, we can use vehicles at high speed across offroad terrain to cross large distances quickly.

Whereas PUBG PC is a 19GB game setup and the updates normally exceed 10 GB, for e.g. the latest update of Vikendi Map was of 15 GB.

The training camp in PUBG PC, named as Camp Jackal, is quite a big one compared to the training camp of PUBG Mobile. A training camp is a place where players practice their skills and accuracy of shooting weapons. Along with it, noobies can also practice driving cars and bikes.

Leveling up your character will reward you with extra points and cosmetic boxes.

The second progression system is for player rank – play better in games and your rank will be improved. The higher your rank, the better players you’ll go up against.

In PUBG Mobile, there are a number of social changes, too. When you are on the home screen, you’ll see a chat bar at the bottom – you can talk to people here and find groups to play squad games with.

At the end of each PUBG Mobile game, you’ll also see the leaderboard – you’ll get to see who won, who came 2nd and 3rd, and who killed the most people. If you kill the most people, you get the MVP award and will be given additional points.

You can also get a chance to unlock most of the cosmetic items by simply playing, leveling up your character, and claiming daily rewards.

If you are playing PUBG Mobile then spotting enemies is not at all a difficult job. However, if you are sitting on your computer screen, you must carry a very high-quality headphones, because you won’t be able to see the footprints on the map.

Everything suspicious on PUBG PC can only be noticed with ears. There is no such option to see the bullet signs, footprints, enemies approaching with a vehicle. That is why it is always difficult to play PUBG PC without a quality headphone.

The Frame per second limit (FPS) in PUBG Mobile is 60fps. It won’t exceed the mark of 60fps while on PC, you can’t play with the same frame per second.

In PUBG PC, 60fps is considered unplayable. On an average, one gets around 90-100 fps and a maximum up to 136 fps. The number even exceeds 300 fps if you are playing on a beast PC.

In PUBG Mobile, one encounters many ‘bots’ during the game. The PUBG Mobile is designed in such a manner where a noob gets his first chicken dinner easily. Even if you are playing in a squad, solo, or duo, you will encounter at least 3-4 ‘bots’ in PUBG Mobile.

While in PUBG PC, there is no such thing called ‘Bots’. The players in the game are generally real people who are quite comfortable playing with a mouse and keyboard. In PUBG PC, the probability of fighting with a noob is comparatively low to PUBG Mobile.