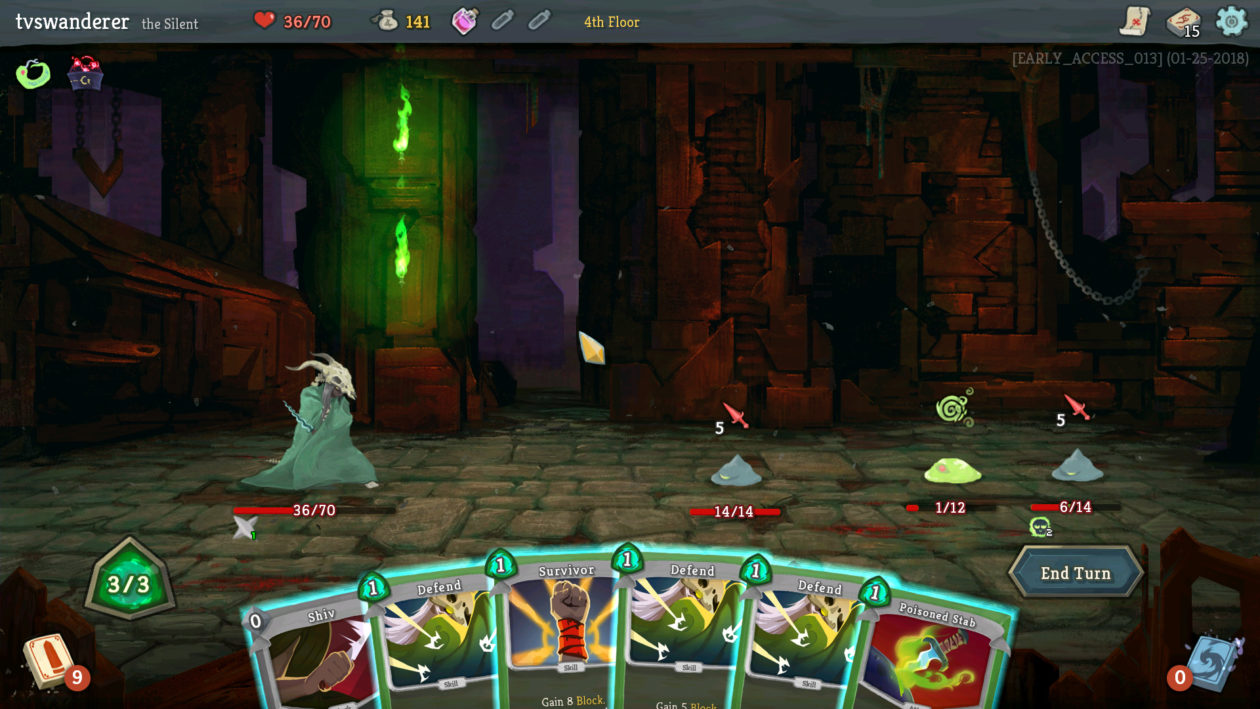 Slay the Spire left Early Access and comes with:

Slay the Spire is a combination of roguelike-like gameplay with a deck-building card game. At the start of a playthrough, the player selects one of four predetermined characters, which sets a starting amount of health, gold, a starting relic that provides a unique ability for that character, and an initial deck of cards with basic attack and defense cards as well what potential color-coded cards tailored to that character they will see through the run. The goal is to work through several levels of a spire, each level having a number of potential encounters distributed in a branching structure with a boss character at the end of the level. Encounters include monsters that vary in strength, campfires to heal or upgrade cards to more powerful versions, shopkeepers to buy cards, relics, and potions as well as to remove cards from the deck, chests with random loot, and random choice-based encounters.

Combat is played in turns. Each turn the player receives a fresh hand of cards and three energy points. The player can play any combination of cards as long as they have the energy to pay for the energy cost of each card, and at the end of the turn, all cards not played are sent to a discard pile. Players’ cards vary by the character but generally consist of attack cards to damage opponents, skill cards that buff themselves, debuff opponents, or add to their blocking power for the turn, and power cards where the effect remains in play until the end of combat. Each opponent on the field will telegraph what move they will make: if they will attack and with how much damage, if they will block, cast a spell to buff themselves or debuff the player. In some cases, the opponents’ attack or the player cards may add unplayable cards representing battle conditions like Wounds and Curses to the player’s deck that can dilute a player’s hand and may add negative effects while in the player’s hand. The player can determine the best strategy to avoid taking any damage after they complete their turn. If the player’s health drops to zero, the game is over and they must restart from the bottom of the spire. Otherwise, if the player defeats all the monsters in an encounter, they typically receive gold and a choice of one of three randomly-selected cards to add to their deck, if desired. Other loot that can be obtained from monsters or other encounters include relics that provide a permanent character buff for the duration of the game, such as increased maximum health, additional energy points, lower casting costs, and automatic blocking, and single-use potions that can be used during any turn for no cost to restore health, buff the player, and debuff or damage the enemy.

The deck-building game requires players to develop a strategy for their deck on the fly based on the cards they can obtain from loot and in synergy with the relics they obtain. Like other deck-building, too many weak cards or the unplayable cards dilute the player’s deck, and the player must strategically decide which cards are the best fit to make the deck effective, when to turn down additions of cards, or when to spend money to remove cards as to maximize the deck’s strength.

Slay the Spire features metagaming aspects. Completed or failed runs contribute points towards unlocking new characters or new relics and cards that will be made available for the specific character. Ascension mode provides several challenges to the player such as to climb the tower with a character using only their starting relic or without adding any rare cards to their decks. A daily challenge gives players a single chance to get as high in the spire as they can under pre-set conditions and a fixed random seed so that each player is starting from the same point and see the same encounters.

Slay the Spire is developed by Seattle-based studio MegaCrit, with Anthony Giovannetti and Casey Yano as lead developers. Their initial goal was to fuse the concept of a roguelike game with deck-building games like Dominion. The game was also inspired partially by the Netrunner collectible card game, which Giovannetti was a fan of and for which he maintains a community website. The game was built on the LibGDX framework.

To help test and get feedback on the game, Giovannetti turned to expert players in the Netrunner community. This was also necessary to determine the appropriate balance for the cards they added, as balancing the difficulty of the game against the randomness of the roguelike encounters and the card-based play was difficult. By using a large number of playtesters, along with gameplay metric reporting from the game client, they were able to determine what cards had positive designs and which cards to remove. For example, they became aware of cards with too low value for the game when they were not picked when offered by players and found cards that were overpowered if they occurred too frequently within game-winning decks. They had no issue when players discovered card synergies that created powerful combinations, a factor of concern in typical collectible card games, as it was a single-player game and there would no opponent that would feel overwhelmed by these combos.

Originally, enemies did not show their next intended action as is common to most turn-based role-playing video games, but this design did not mesh well with the roguelike nature of permadeath. 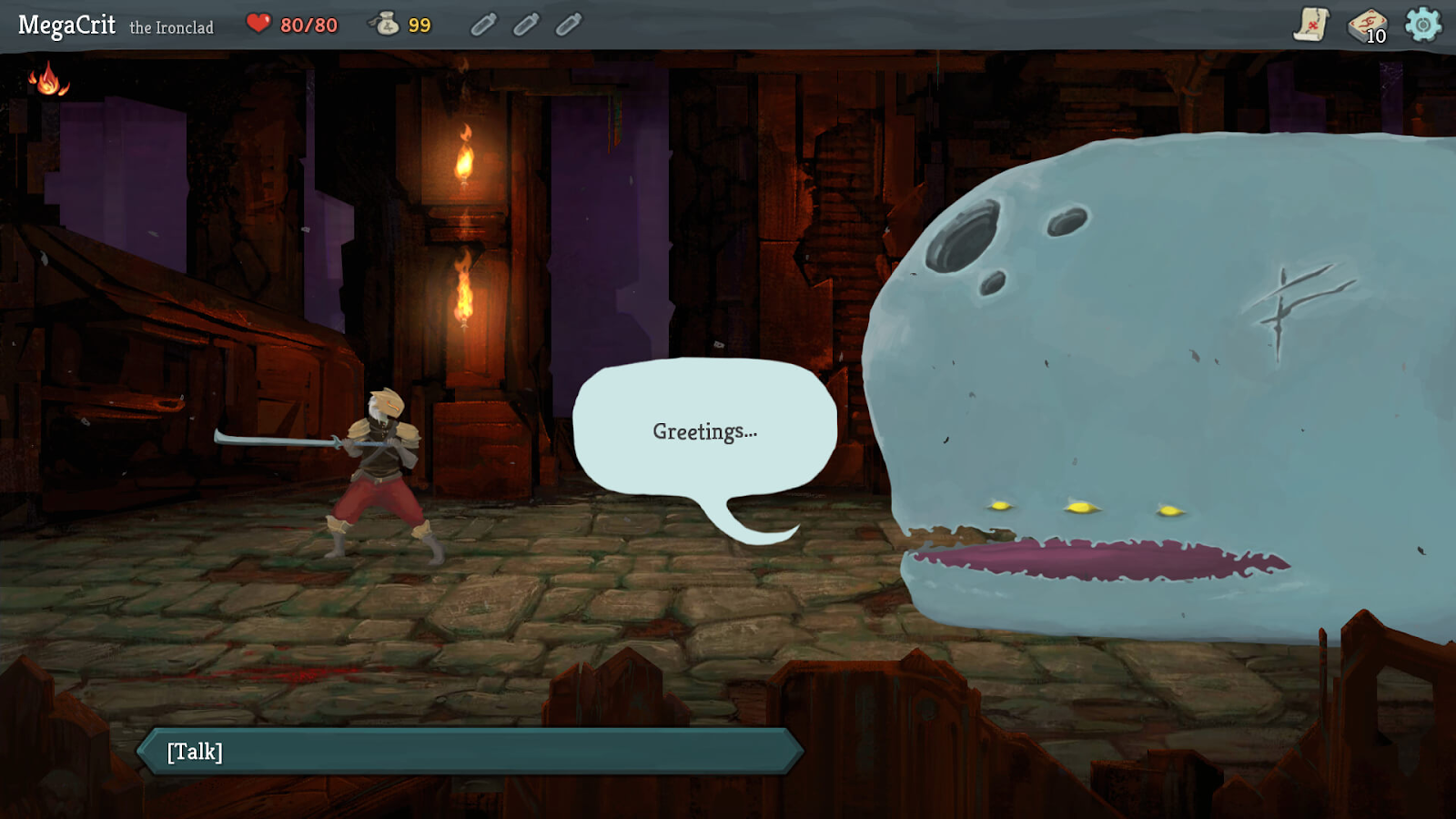 They first created a “Next Turn” system where the player could select individual targets to see what their chosen action would be in part of the game’s user interface. The “Next Turn” system brought something unique to the game, according to Giovannetti, and enabled them to create new buffs and debuffs that were easy to describe to players through the interface. However, from a user-interface perspective, there were still issues particularly when multiple enemies were present. They then transitioned from the “Next Turn” to the new “Intents” system, which used icons to represent the enemy’s next move, though originally this lacked exact numbers for attack values, instead of representing certain ranges of attacks by different weapons. Giovannetti felt they didn’t want to present too many numbers to players to overwhelm them and make the game off-putting, but they discovered through playtesters that having the numbers available was more engaging, did not require the player to have to memorize what each symbol meant, and enabled players to create new strategies. The approach for players to progress through the spires with branching pathways and random events was inspired by FTL: Faster Than Light.

Upon its early access initial release in November 2017, the game featured two playable characters with plans for at least a third to be added during the early access period. Giovannetti said that while they could add more cards for a character’s card pool, they found having about 75 different cards available was the right balance to give some potential strategy to the player; having too many card types would make deck construction during runs much more haphazard, an issue that Netrunner had faced. Charlie Hall of Polygon found that, in contrast to most other early access titles, the game’s mechanics and core gameplay was already well-developed at the start and found that the sustained weekly updates made the game more attractive to potential buyers.

Other changes over the course of early access development included adding more potions with novel effects, and adding more events to the game. On Windows, the game also supports user-created modifications through the Steam Workshop, allowing users to create new playable characters, cards, monsters, and other items. The early access period ended on January 23, 2019, with the full release of the game. An official fourth playable character was added to the game as part of a free content update, first released to Windows versions on January 14, 2020.

Humble Bundle helped to provide publication support for MegaCrit for the console releases: Slay the Spire was released for the PlayStation 4 on May 21, 2019, for the Nintendo Switch on June 6, 2019, and for the Xbox One on August 14, 2019.

Mobile versions of the game for iOS and Android were planned for release in 2019, but in December 2019, MegaCrit pushed its release into early 2020. The iOS version was released on June 2020, and was feature-parity with the computer and console releases, with Android releases to follow later

According to MegaCrit, the game’s first early access release in November 2017 was very slow, with about 2000 copies selling across the first weeks, the period in which most games sell the most copies. While they had seeded redemption keys with streamers and influencers, these had not converted into sales. It was not until a Chinese streamer featured the game on their channel that had over a million views, did MegaCrit start to see the large rise in sales. During the week ending January 21, 2018, Slay the Spire was the second highest-sold game on Steam. By February 2018, the game had more than 500,000 players, according to SteamSpy estimates. MegaCrit announced that by the end of June, sales of Slay the Spire had exceeded 1 million, and reached 1.5 million by March 2019.

On release, the game received positive reviews, with a Metacritic aggregate rating of 89 out of 100.