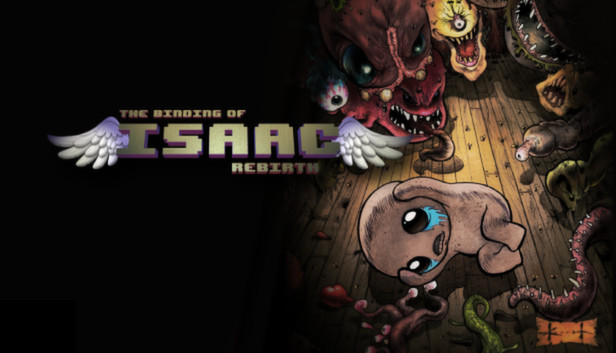 The Binding of Isaac is a randomly generated action RPG shooter with heavy Rogue-like elements. Following Isaac on his journey players will find bizarre treasures that change Isaac’s form giving him superhuman abilities and enabling him to fight off droves of mysterious creatures, discover secrets and fight his way to safety.

The Binding of Isaac: Rebirth (like the original) is a top-down 2D game where the player controls the character Isaac, alongside fourteen other unlockable characters, as he traverses his mother’s basement, fighting off monsters and collecting items. The gameplay is presented in a roguelike style; the dungeon levels are procedurally generated through a randomly generated seed into a number of self-contained rooms, including at least one boss battle. Like most roguelike games, it has permadeath; when the chosen character dies from too much damage, the game is over. Rebirth allows a play-through to be saved at any point. Map seeds can be shared, allowing for multiple people to try the same dungeon layout.

The game is controlled similarly to a multidirectional shooter. The player moves their character around the screen, shooting their tears in other directions; the tears are bullets that defeat enemies. The player character’s health is tracked by a number of hearts. The character can find items that replenish hearts; other items give the character additional hearts, extending their health. Throughout the dungeons, the player will find bombs to damage foes and destroy obstacles; keys to open doors and treasure chests, and coins to buy items. Many items impact the character’s attributes (such as speed and the damage and range of their tears) and other gameplay effects, including a character who floats behind the player-character and aids in combat. Some items are passive; some are active and reusable (requiring the player to wait a number of rooms before they can reuse them), and others are single-use items that then disappear. The player can collect any number of passive items, whose effects build on previous ones (creating potentially powerful combinations). A player can only carry one reusable item or one single-use item, replacing it with another if found. Other rooms in the dungeons include special challenges and mini-boss fights.

In addition to expanding The Binding of Isaac’s number of items, monsters, and room types (including those spanning multiple screens), Rebirth provides integrated controller support and allows a second local player to join in with a drop-in-drop-out mechanic. The second player controls a follower of the first player-character with the same attributes and abilities of that character, costing the first player-character one heart. The second character cannot plant bombs or carry items.

About the Binding Of Isaac: Rebirth

The Binding of Isaac: Rebirth is the ultimate of remakes with an all-new highly efficient game engine (expect 60fps on most PCs), all-new hand-drawn pixel style artwork, highly polished visual effects, an all-new soundtrack, and audio by the sexy Ridiculon duo Matthias Bossi + Jon Evans. Oh yeah, and hundreds upon hundreds of designs, redesigns, and re-tuned enhancements by series creator, Edmund McMillen. Did we mention the poop?

The Binding of Isaac: Rebirth’s plot follows the biblical story of the same name, similar to the original game. The young Isaac had been living happily with his mother. Inspired by religious programs on television, his mother became convinced that she was being instructed that Isaac was corrupt and she must try to save him. She removed all his possessions (including toys and clothing), believing they were the corrupting agents, and later locked him in his room to protect him from the evil outside. When she received instructions to sacrifice her son to prove her devotion to her faith, Isaac fled through a trap door in his room leading to the basement.

The Binding of Isaac was developed by Edmund McMillen and Florian Himsl in 2011 during a game jam after the completion of Super Meat Boy, McMillen’s previous game. Since Super Meat Boy was successful, McMillen was not concerned about making a popular game; he wanted to craft a game that melded The Legend of Zelda’s top-down dungeon approach with the roguelike genre, wrapping it in religious allegory inspired by his upbringing. They used Adobe Flash since it enabled them to develop the game quickly. McMillen quietly released the sport to Steam for private computers, where it became very fashionable. Wanting to expand the sport, McMillen and Himsl discovered limitations in Flash which made expansion difficult. Although they might incorporate more content with the Wrath of the Lamb expansion, McMillen had to abandon a second expansion thanks to the restrictions.

McMillen and Rodriguez initially wanted to develop The Binding of Isaac: Rebirth for the Nintendo 3DS as a tribute to its roots in Nintendo’s Legend of Zelda series. Nintendo, however, didn’t authorize the game’s release for the 3DS in 2012 for content reasons. Although they had spent a while creating the 3DS version, McMillen and Rodriguez decided to specialize in pc and PlayStation versions instead; those platforms allowed them to extend the game’s capabilities. In addition to the PlayStation 3 and Vita consoles, Nicalis was in discussions with Microsoft for a release on the Xbox systems and McMillen had also considered a future iOS release.McMillen and Nicalis opted to move development from the PlayStation 3 to the new PlayStation 4 in August 2013, announcing its release at Sony’s Gamescom presentation. The PlayStation 4 and Vita versions were released with the PC versions on November 4, 2014.

During development, three senior Nintendo employees, Steve Singer, vice chairman of licensing; Mark Griffin, a senior manager in licensing, and indie development head Dan Adelman, championed the sport within the corporate. They continued to figure within Nintendo and secured the approval of Rebirth’s release for the 3DS and Wii U in 2014. McMillen and Nicalis, after tailoring the sport to run on more powerful systems, worked to stay it intact for the 3DS port. They spent a few years on the conversion and, although they got the sport to figure on the first 3DS, its performance was sub-optimal. They were one among the primary developers (with Nintendo help) to get a development kit for the New Nintendo 3DS, which had more powerful hardware and memory to run the game at a speed matching that of the other platforms. The announcement of the New 3DS and Wii U versions was made with plans for an Xbox One version, and the game was released for all three systems on July 23, 2015.

According to review aggregator Metacritic, The Binding of Isaac: Rebirth received “generally favorable” reviews; the iOS version received “universal acclaim”. Dan Stapleton of IGN praised Rebirth for the seemingly-endless variation in gameplay created by each run-through, giving him “plenty of motivation” to continue playing; his only criticism was its lack of in-game information on available power-ups.GameSpot’s Brent Todd wrote that the game’s story and imagery may be initially disturbing, Rebirth has “speedy, varied gameplay and seemingly neverending new features” which would keep the player entertained for a long time. Simon Parkin of Eurogamer said that Rebirth “feels like the product of the psychotherapeutic process”, but is “the most accessible Rogue-like [game] yet made” thanks to its easy control scheme and randomization of every run. Nic Rowen of Destructoid said that Rebirth was an excellent improvement on The Binding of Isaac, “an incredible experience that cannot be missed”.

Afterbirth+ received generally-favorable reviews from critics. Jose Otero of IGN praised its variety: “The unpredictable items and varied enemies make it one of the wackiest and replayable games I’ve ever experienced.” Although Peter Glagowksi of Destructoid gave its DLC a positive review, calling it an “impressive effort”, he wrote that the DLC’s base content has little to supply newcomers to the series.